The Working Principle of the Blower

Synchronous gear: It is composed of the ring gear and a hub, which is convenient to adjust the gap of the impeller.

Transmission mode: mainly direct coupling with coupling. If required by performance specifications, a V-belt pulley can also be used for variable speed. The coupling chooses flexible coupling, which can alleviate the impact and compensate a small amount of axis deviation. In addition to the electric motor as the driving machine, the large flow fan can also use a steam turbine or other driving machines. 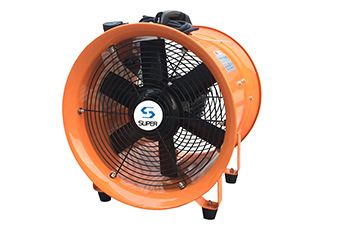 The working principle of an orange Portable Blower is similar to that of a centrifugal fan, except that the air compression process is usually carried out under the action of centrifugal force through several working impellers (or several stages). The blower has a high-speed rotating rotor. The blades on the rotor drive the air to move at a high speed. The centrifugal force causes the air to flow in the involute-shaped casing along the involute to the fan outlet. The high-speed airflow has a certain wind pressure. Fresh air enters and supplements from the center of the cabinet.

The working principle of the single-stage high-speed centrifugal fan is: the prime mover drives the impeller to rotate at high speed through the shaft, and the airflow enters the high-speed rotating impeller from the inlet axis and becomes a radial flow which is accelerated, and then enters the diffuser cavity, changing the flow direction and decelerating. This deceleration effect converts the kinetic energy in the high-speed rotating airflow into pressure energy (potential energy), so that the fan outlet maintains a stable pressure.

We are a Ventilation Blowers Manufacturer, if you are interested in our products, please feel free to contact us.

Previous: The Best Dog Tunnel in 2020
Next: What Is a Blower?
Contact Us
Navigation
Products
Follow Us